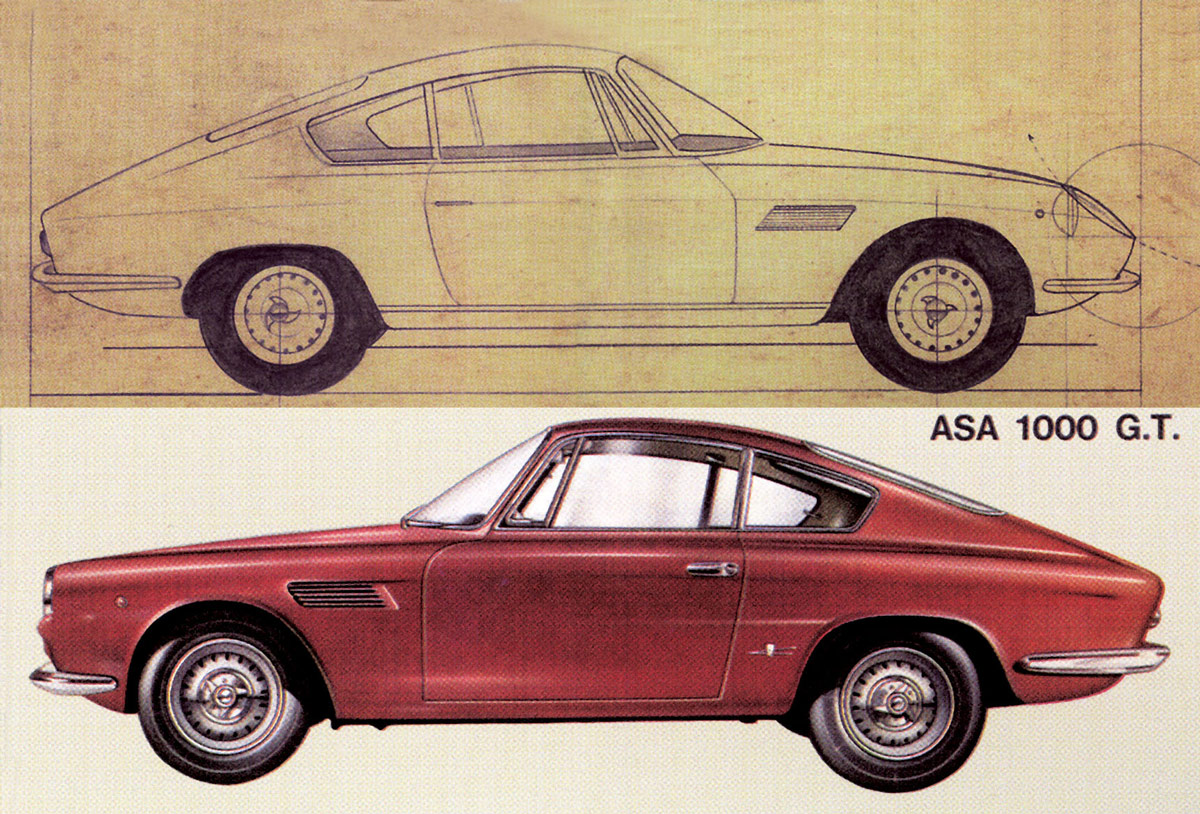 By the end of the fifties, Ferrari started testing a Gran Turismo prototype with a four cilynders engine of 850 cc , installed on a modified chassis and body Fiat 1200 Pininfarina, with the aim of entering the growing market of small, fast sporting cars.

After having realized this unique model, the engine was modified and on 1961 at Salone dell'Automobile di Torino, a new sporting car showed up at the Bertone stand: on the bonnet a rectangular logo symbolizing the Italian Tricolor with the number 1000 in blue on a yellow background.

The body was designed by the very young Giorgetto Giugiaro , at the time working for Bertone, and manufactured by Carrozzeria Bertone.

The chassis, conceived by Eng. Giotto Bizzarrini , on the guideline of Ferrari 250 GT: tubular, with elliptical side-members and strenghtening elliptical crossbars. 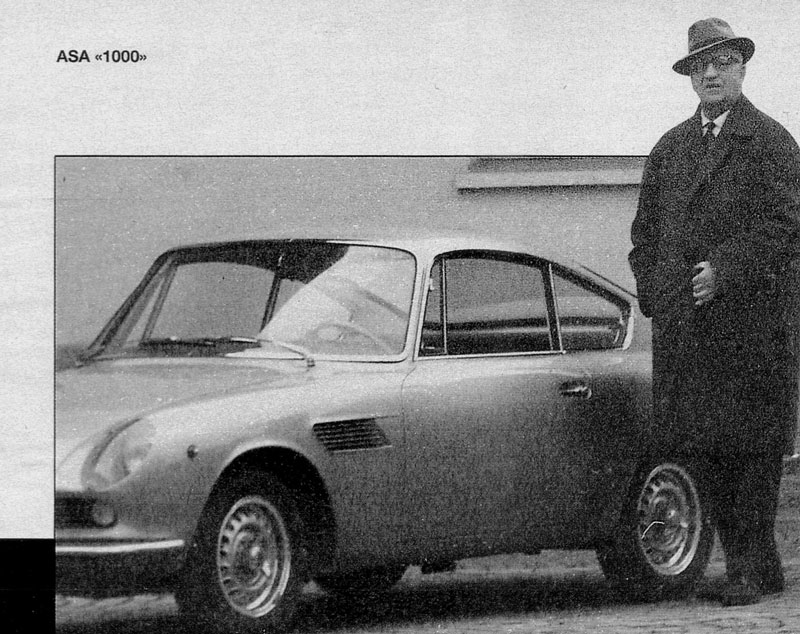 The engine, not shown at the Salone di Torino as the car was not yet registered at ANFIA (Associazione Nazionale delle Fabbriche di Automobili e Affini) was the evolution of the four cylinders of 850 cc installed on a Fiat 1200 the year before.

After long discussions , the production started in Milano thanks to a group owned by Mr. Oronzio De Nora entrepreneur in the field of electrochemical industry.  A new company, managed by Mr.Niccolò De Nora, was established under the name of ASA (Autocostruzioni Società per Azioni) located in the periphery of Milano in the Lambrate quarter.

The technical assistance was granted to the new born ASA by Ferrari with the supply of chassis and engines and the consultancy of Chiti and Bizzarrini ; moreover Bertone was the manufacturer of bodies and responsible for the final assembling. 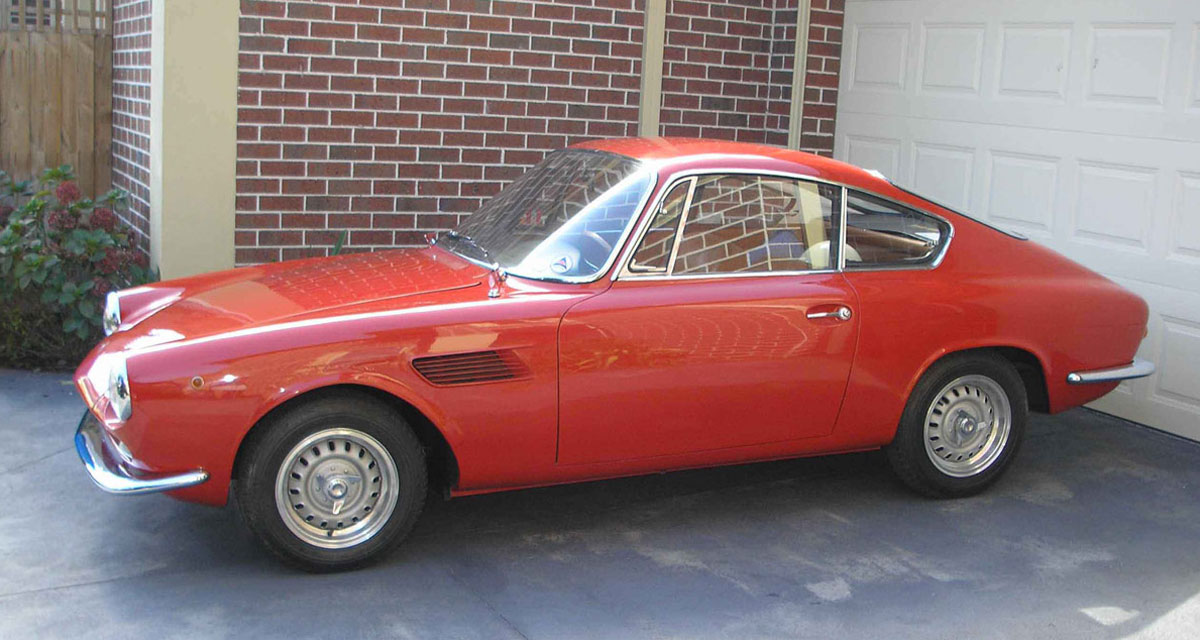 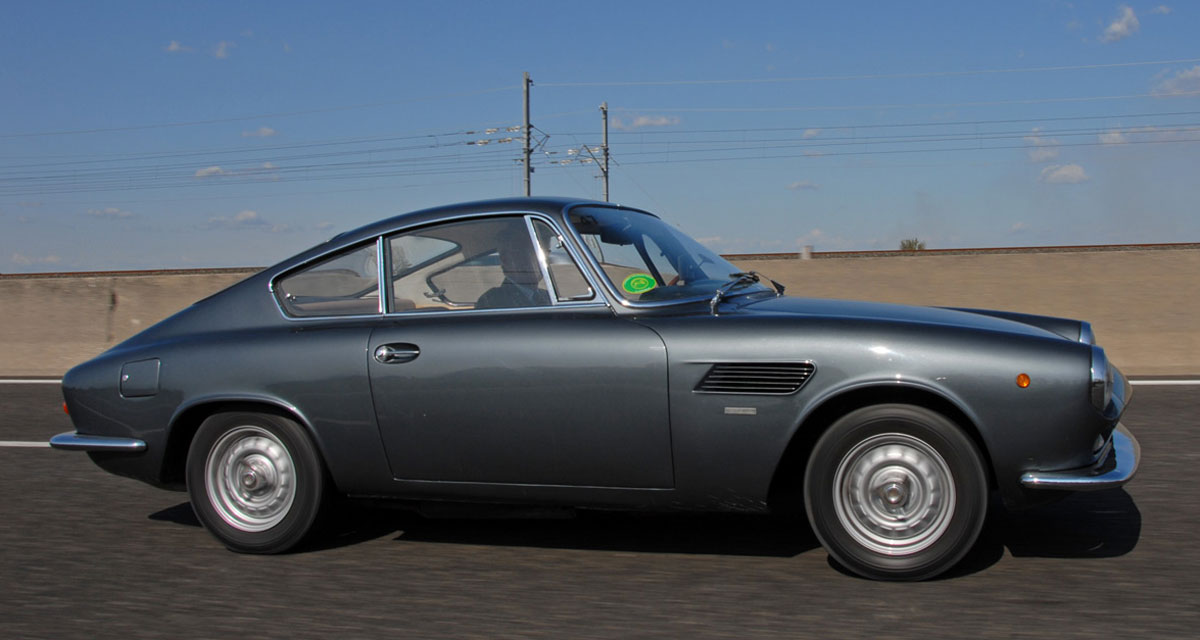 The agreement between De Nora and Ferrari did not allow the use of the logo or the name Ferrari on any car part, but for the enthusiasts the new car maintained the nickname of "Ferrarina".

On 1963 the production, preannounced in 1962, eventually started at the Bertone's premises where no more than ten exemplaires were assembled.

The production, after some discussions between Bertone and De Nora, was transferred to Ellena, Torino, and the new coupé was marketed outside the Ferrari network with the exception of USA where it was sold by Luigi Chinetti, official Ferrari dealer in North America.

In 1964 the spider 1000 was officially presented in its final version with fiberglass body , manufactured by Bertone, with a riduction of about 120 Kg. compared to the prototype shown at Geneva the year before. 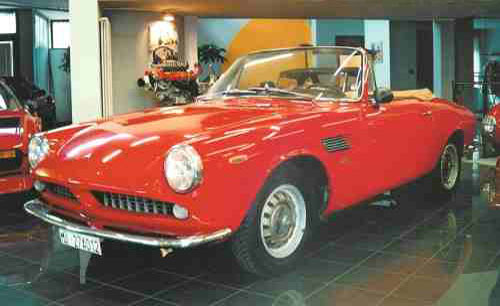 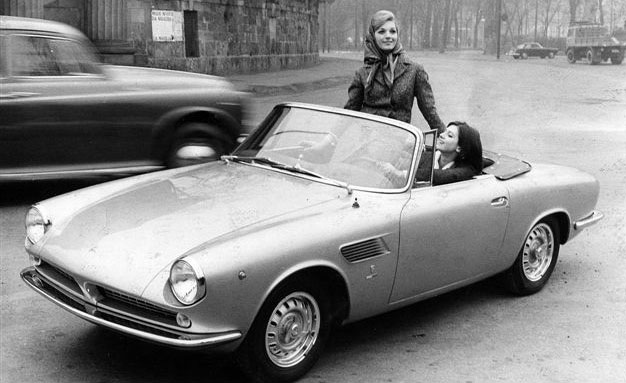 Despite the good performances and the extremely high technological content, the "1000 GT" was not as succesfull as expected. The reasons : the lack of a glamouring sporting mark and the expensive sale price (2,520,000 lire in 1965 both for coupè and spider).

Even the activity of Luigi Chinetti, former pilot and Ferrari dealer in USA, trying to market the car with the undeclared understanding of ASA's noble origins, did not get very positive market results.

In 1962 Giotto Bizzarrini designed a race ASA, GTC (Gran Turismo Competizione) to partecipate to international car races: the engine displacement was reduced to 998 cc to allow the participation between the prototypes in the "Mondiale Marche 1963". 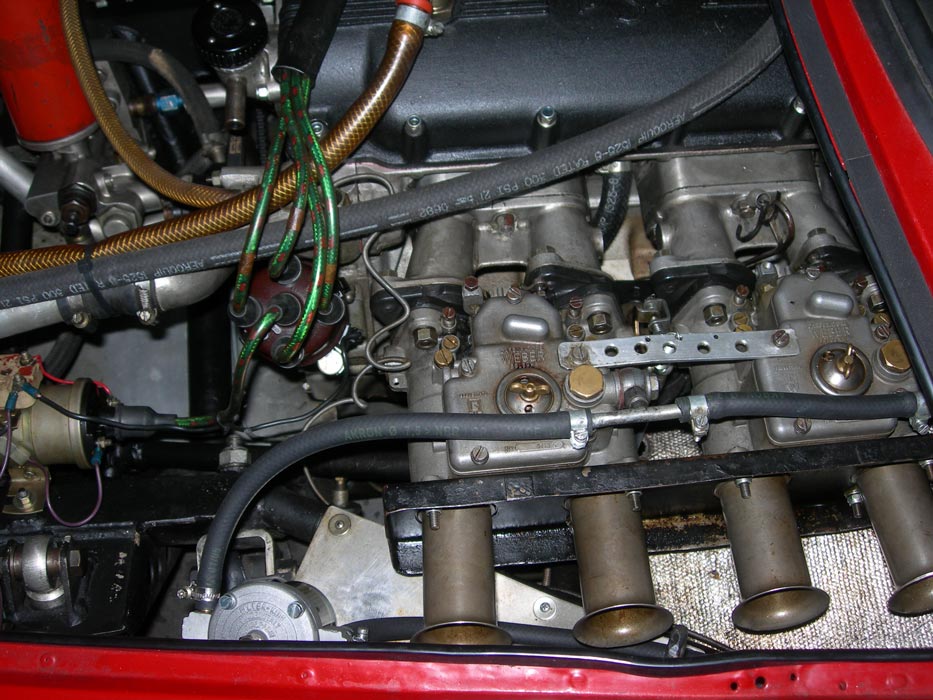 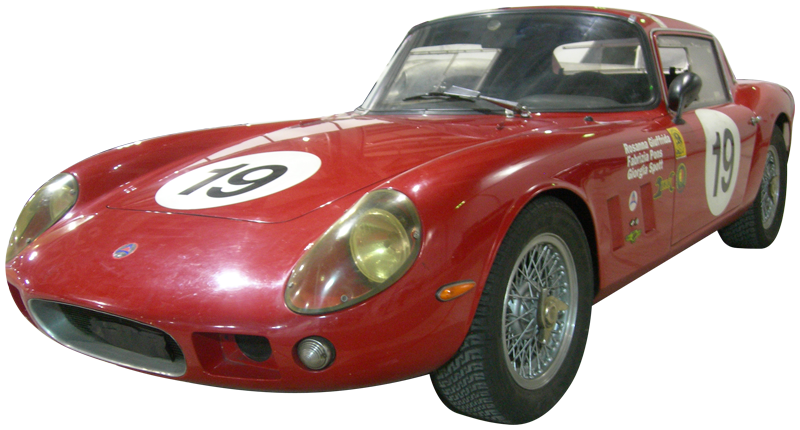 This car, called "alleggerita" (lightened) wit a body totally made of aluminium and back and side sliding windows in plexiglass.  The total weight of the "411" was reduced to 650 Kg. compared to the 740 Kg. of the standard version.

The "411" was equipped with a gaudy air intake on the bonnet (as can be seen in the 1965 picture of the same car during the "Targa Florio".   Only four units were manufactured, The 1092 cc engines left were then installed in some coupè with the mark ASA1100 GT 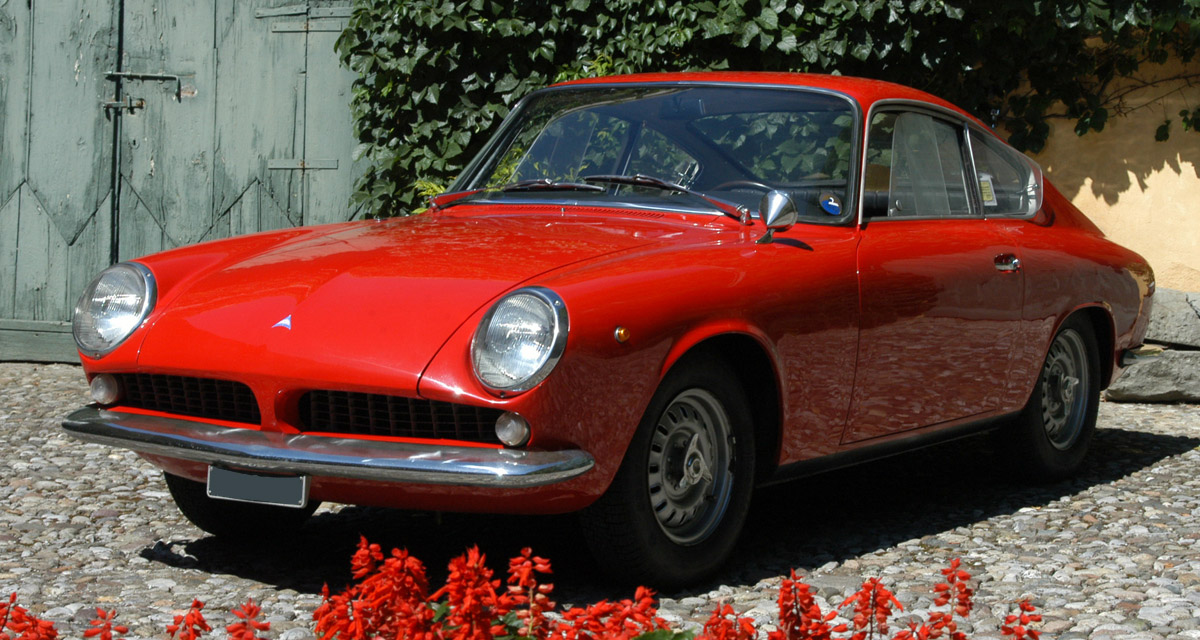 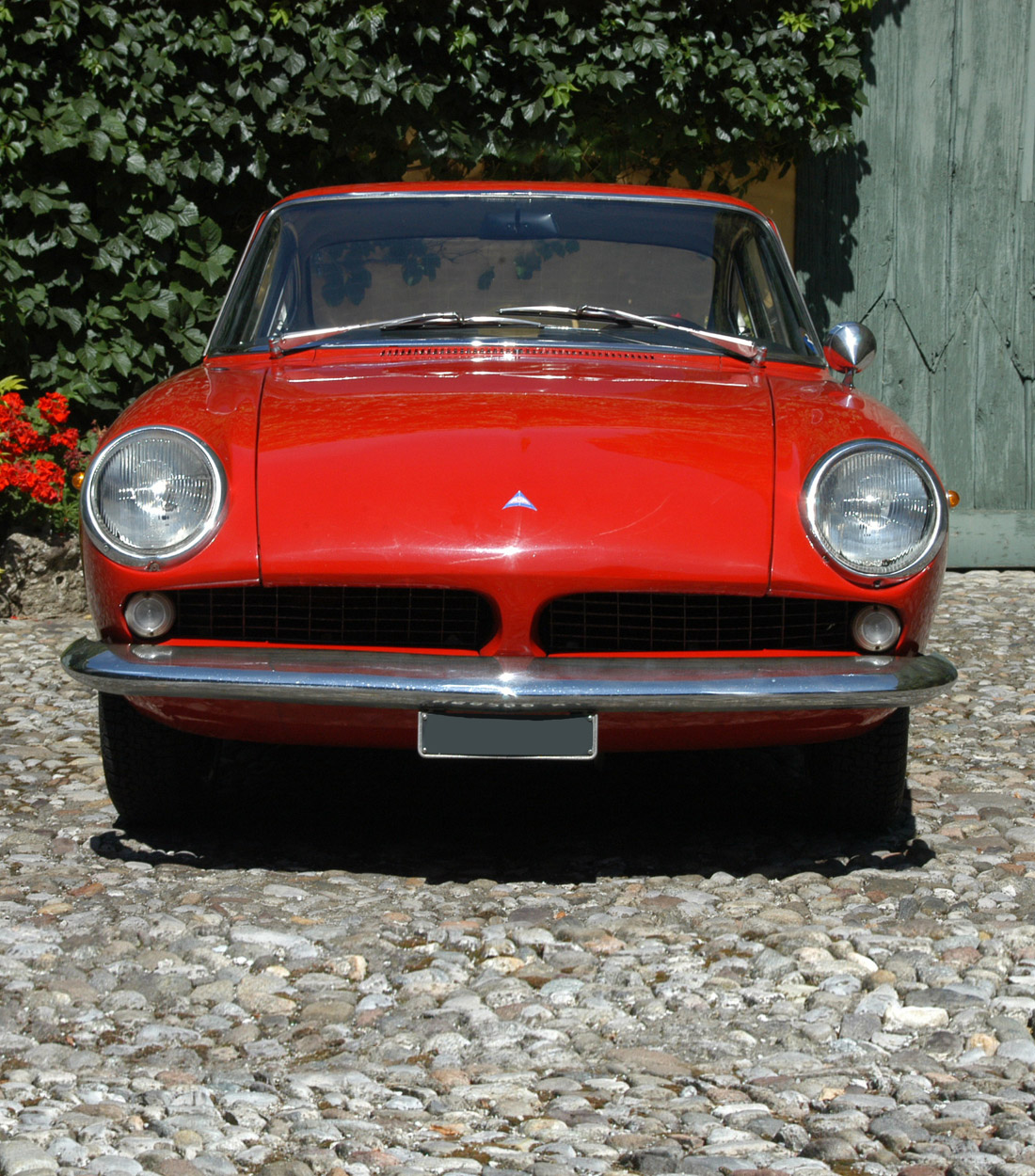 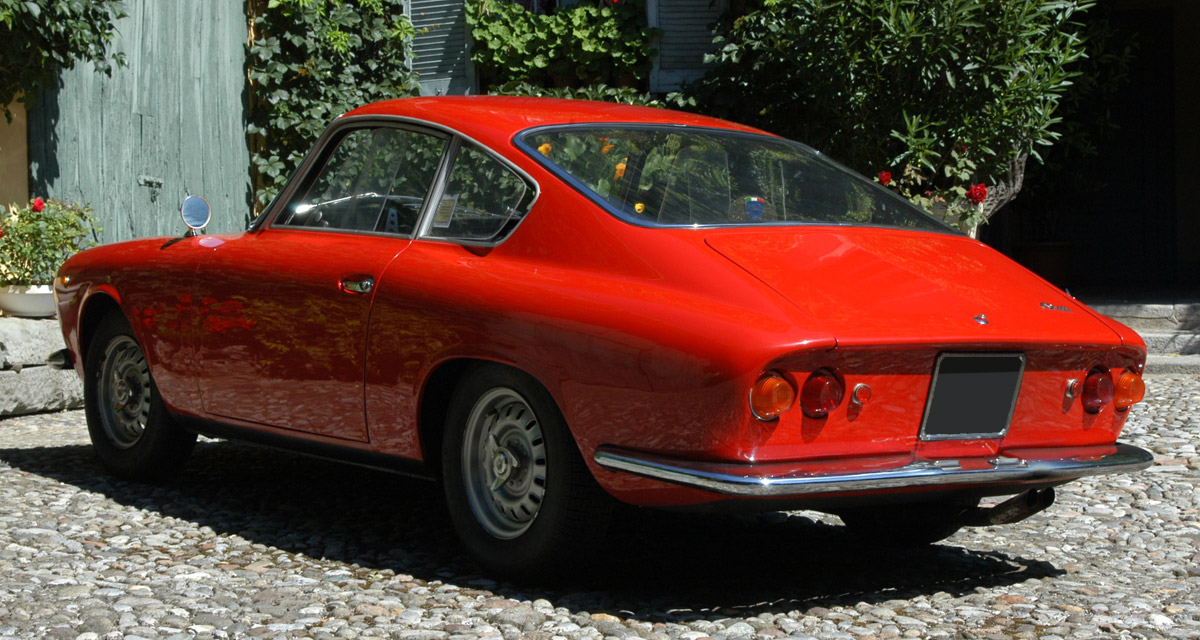 Another unique prototype of GT was realized in 1964: the body entirely in fiberglass with a totally new four cylinders of 1800 cc. The prototype driven by Giorgio Pianta was destroyed in a crash during the Targa Florio race in 1966.

Two years later a new competition car was presented: "ASA RB613 (Roll Bar)" ; a very interesting coupé-spider, with a fiberglass body, equipped both with a six cylindres engine of 1290 cc directly derived from Ferrari 250 engine, or with the four cylinders of 1800 cc.

The RB613 was manufactured by Corbetta body shop in only four models: one equipped with the six cylinders engine ended in the USA and raced at Sebring and Daytona ; lost in a crash.

Two with same six cylinder engines are still in Italy. The last one equipped with the 1800cc engine was sold in Japan: no news up to date.

In 1967 when tha ASA venture was near to the end, the former Ferrai Engineer Giovanni Cadorin designed and realized a Formula 3 single-seater equipped with a Cosworth engine waiting for a new ASA propeller: to day it seems that the single-seater is in advanced restoration phase.

In the late seventies few more cars were assembled by using the leftover material after the factory closing.

We can mention a RB613 original in all its parts as well as few GT and at least two spider.

Very recently a competition GT equipped with one of the two left 1800 cc engines has been assembled in North of Italy; it is a perfect replica of the car destroyed at Targa Florio on 1963 but with an aluminium body instead of the original fiberglass one.